The importance of AugustinFresnel ‘s contribution to the wave light theory has certainly been a bit shaded by his reputation as the “inventor” of the lens which hold his name. The concept of a lighter lens in the form of a series of annular steps is attributed to Georges-Louis Leclerc, Comte de Buffon, followed by the Marquis de Concorcet who proposed to create a lens out of parts instead of a monolithic bloc. A Fresnel did the development of the actual large lens made of parts to be used in lighthouses.

Most and yet powerful light source at the time were omnidirectional, they created a bright point which was losing its intensity as the light spread in all directions. To project further into the distance, it is necessary to reorient the rays and to keep them parallel to create a beam of light. There is two ways to achieve this. The first one is to place the light source at the center of a parabolic mirror. The second one is to use a half convex lens, which does the same reorientation of the light rays using the law of refraction. Fresnel used this second approach with a discretization principle proposed originally by Buffon, which subdivides the lens in several smaller parts. He published his first report on optics and lamps for lighthouses on August 29, 1819” (source Uslhs.org.) and the first installation came quite rapidly after in 1823 in the Cordouan lighthouse near Bordeaux.

In XIX century, making of a lens, out of glass or even a parabolic reflector out of metal is a painstaking fabrication, even small, the amount of energy and care to respect the geometry is huge when considering the size of the object. In both case, polishing is a key part. Polishing was already often required in the regular glass production, and for lenses it was already a well-known subject, many polishing machines were developed through the XVII and the XVIII century, using more and more mechanical power. But polishing such a hard material remained the bottleneck of the production. And even with these “new” tools, a final hand touch was most certainly necessary. It gets even worst when the lens needs to be big, the bigger the lens the bigger the light beam. Not only the polishing needs to be done on a larger surface, but the production of the lens itself is much more difficult.

The first aspect that makes a large reflector or lens difficult to make is the weight of glass, large and thick pieces of glass are heavy, this weight affects the whole process and requires some special equipments during fabrication, transport and erection. When one sees a large piece of glass, this is the first thing to be constantly reminded of.

Lenses are casted by pouring molten glass into a mold, to obtain a shape as close as possible to theory. Then the piece is brought down in temperature very slowly. This cooling also called an annealing process is meant to bring back the glass in fusion at very high temperature (1200 to 1500 °C depending of the glass type) to “normal” temperature. The process is very slow to avoid the create, some thermal stress and constrains. A too rapid cooling will end up with broken glass. Once at room temperature, the lens is then polished to remove all imperfections left by the molding and unmolding process. It is long and also risky. A crack is easy to make. Polishing is a pain, already for a flat surface, but when the curvature is constantly changing such as a lens, the polishing can compromise the geometry of the lens. This is the second main problem to solve which can take an enormous amount of time. 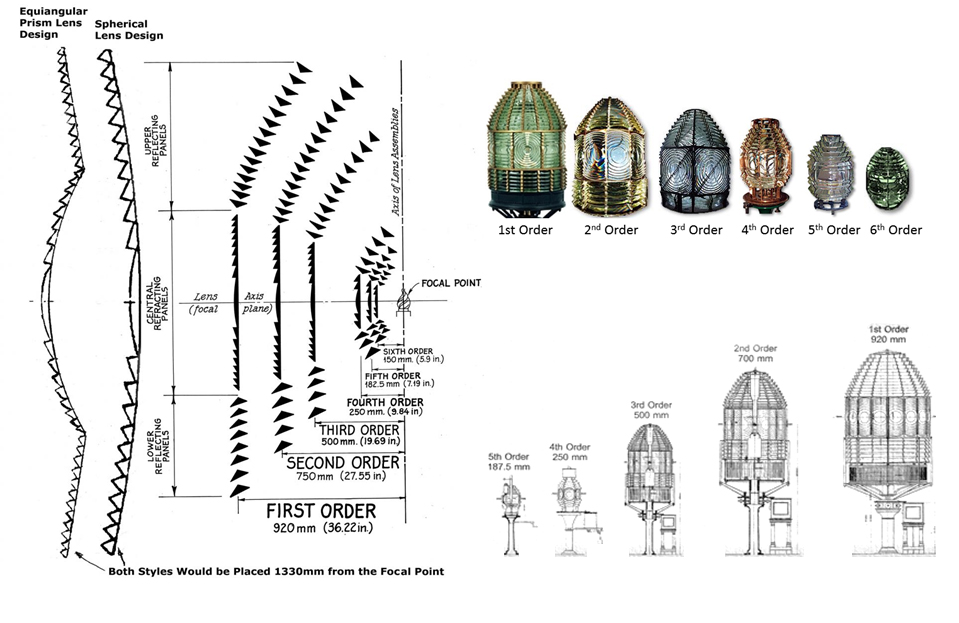 All the above considered, making a large lens with small elements, lighter, easier to transport, and most importantly easier to polish drastically change the making of the optical device. Nethertheless there were still some casting of quite large and complex pieces, still some polishing. A Fresnel was actively involved at each steps of the process, from theory to the making.

The deployment of these lenses was quite rapid on both side of the Atlantic with a few companies competing with ideas and new lenses, larger sizes, different sources of lighting, more or less bright … A few website go through this fascinating time of the development of the light house along the cost of the Atlantic, here are one from which I could not help to snap a few references to tease your curiosity: http://uslhs.org/history/fresnel-lenses

The Fresnel lens can be found at smaller scale, used the other way around, with sun light, its parallel rays can be focused, concentrating the sun energy. This can become a handy oven or a light concentrator for PV cell, or even just a magnifying glass.

Down the line, despite many interesting technicalities, the most exciting part for me of the Fresnel lens for lighthouse are the sizes of later generation which could be as tall as a 2 stories building, all made of optic grade glass. Most of this beauty comes from the glass itself and its geometry. This is not a chandelier or some kind of pale imitation of a diamond. It is an optical instrument and what a beautiful instrument !

Fig: Close up views of various type of lens

Some side effects due to the fabrication process or to the nature of the device can be noticed. The first one is certainly the variation of aspects due to the curved / ladder / prismatic geometry. It reminds of a kaleidoscopic effect, the prism acting as multiple mirror, introducing multiple reflection of the surrounding light. Even more than a mirror the prism with its multiple facets creates multiple refractions and total reflections. They produce an array of deep and intense colors within the glass which I found fascinating, as primal as a rainbow or light itself.

The second one comes from the use of massive glass pieces, which is actually quite rare. If one looks closely at them, the glass has some imperfections on its surface, remaining scars of its production process, small strikes, lines, unevenness as a reminder of the hard process it took to produce them. If one push further the enquiries, and that would be the subject of some future work and posts, it also quite interesting to consider how sun light pass though these lens, what projection it creates and how this can become an actual mean for new design with light ….