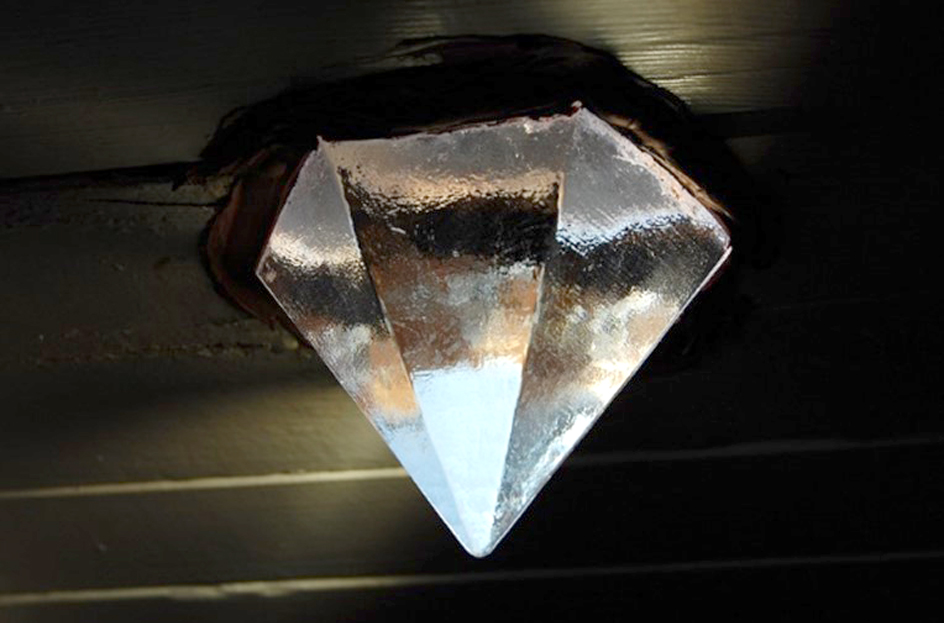 The association of word Deck + Prism is self-explanatory. One can easily imagine a prism going through a boat wooden deck to provide light below. But why a prism? What does it bring more than a rod, a tube or a sphere or even just a flat tile? Why bother to make a prismatic shape? “Glassian.org” describes what are these natural lighting devices. Actually, “Glassian.org” does much more. it compiles numerous old patents, catalogues, references of suppliers of deck prisms and about all devices which relate to glass and light before the first world war. This website turns out to be a reference if not, one of the main sources of information on this topic, if one judge by the number of articles, websites, papers, thesis which are referring to this amazing website.

Concerning the deck prism Glassian describes that : “the deck lights were the first form of prism glass- the earliest known patent is Wyndus’ of 1684; a discovery of a new experiment for the great and durable increase of light by extraordinary glasses and lamps,” sadly, the details are not specified. Glassian explains “Fire at sea is a disaster, more so on a wooden ship or with a flammable cargo. Safely lighting a ship’s interior with daylight and prisms instead of flames was a practice widely adopted. Colliers and lime cargos were especially dangerous (slaking lime becomes very hot). The glasses work both directions: they daylight the hold, but also show on deck any light from a cargo fire.”

Fig: The diagram from Sir Isaac Newton’s crucial experiment, 1666-72. A ray of light is divided into its constituent colors by the first prism (left), and the resulting bundle of colored rays is reconstituted into white light by the second. ( http://www.webexhibits.org/colorart/bh.html)

The date of the patent is intriguing moreover when one considers that just 20 years before Isaac Newton was also playing with prisms with his extraordinary findings about the composition of light. But no connection is made with Newton.

Again, what does the prism shape do in the case of this specific deck prism? Without any drawing of the actual piece, one can only rely on later versions which have potentially different shapes, some of them being clearly decorative. Some other could aims to concentrate or redirect light in some ways, but their shapes or orientations seem to be badly defined to do so.

Even with an adequate geometry for the prism, one can also guess that the light transfer was certain quite low. In a fully dark environment it was creating an appreciable presence but hardly a source of light that could really raise considerably the light level underneath the deck, particularly just considering the small sizes of the prism or a very small number of them.

The prismatic shape with its multiple plans with different orientation, multiplies the possibility to reflect light totally. These plans are acting more as a mirror and signaling its presence similarly as a jewel. Not very efficient but clearly much better than nothing at all.

These prisms were certainly casted. Considering the texture left on the exterior surfaces, the molds were quite raw and the polishing quite minimal. Even if the rough surface is quite beautiful, with such a grainy surface, the sun light would be more scattered in all directions than properly refracted (and reflected) in a specific one. If this scattering of light on the surface of the glass overpowers the refraction in the prism, any light redirection or diffusion from the prism shape would be difficult to perceive, the main feature of the device would hence be not much more than some kind of light concentration within the glass elements.

The result is already quite useful nonetheless and most importantly it introduces the idea that an “optic devices” made out a clear material such as glass could be used to transfer light through an opaque material (1) and eventually project light into a blind space (2) . If one considers the fiber optic light redirection system or the use of prism to redirect light, we will see that Windus Patent opened up a rich field of experimentation and innovation for many inventors to come in the next centuries. But let’s consider the first principle: transferring light with glass through an opaque material (a deck, a roof or a wall )(1) Some quite recent system, using fiber optics such as WascoSkyligth or Echy are exploiting this principle in different ways. They conduct light, deeply into area of building without enough natural light. These devices are usually coupled with a heliostat which is tracking the sun to keep the light beam properly oriented in the axis of the glass fiber.

The main drawback even more than for the early deck prism is that they are dependent from direct lighting, ei the sun, which is highly dependent of the climate and therefore the location of your project. In many places, direct sunlight is quite rare, or present for just a portion of the day and of the year. One needs a backup solution, similarly as the solar cell system, but in our case, with no hope for stocking the light into powerful batteries. Therefore, these devices are coupled with some artificial light sources, which double up the systems and compensate when the sun is not there. The grail would be to make such devices works also with diffused light and work in any light conditions…. but this is another story. However, one of the key aspects of all of these artefacts is to provide a natural light presence, with its wider spectrum than what most artificial light can offer, but also its variability. Just this aspect is a great feature even if it is inconsistent, and subject to high variation under certain climate. Being inconsistent is only a problem if you are focused on the “efficiency” of the devices (how much light does it bring and therefore let you save energy). But natural light is not only about efficiency, regardless of its higher quality, it is also about being in contact the environment moreover in badly light spaces. It is great that it changes, that it disappears, that it fluctuates, it is just alive. Its main quality is certainly its inconstancy and uncontrollable nature.

“bringing natural light into a badly light space” is exactly what the design proposal of James Carpenter and Luke Lowings for a project in London intended to do. The project places a large “light” tube within an interior courtyard which received not much direct sun. In fact, it can be seen as a scaled version of both the deck prism and these fiber optics principles. The tube gets its light source on the roof, with the help of a heliostat, which tracts the movement of the sun and constantly adjust and redirect the light flow to be constantly aimed into the axis of the tube. The surface of the tube is enhanced by what seems to be some prismatic groves which help to diffuse the light on the tube than just transferring it to the other end as a fiber optic would do. This project is very inspiring as most of James Carpenter and his teams do.

One last system can be mentioned, it is quite well known as been featured in numerous books as an innovative material, the translucent concrete even if I have not found an actual project which uses the product apart from prototypes. (Any references are welcome) Nonetheless the concept is reaching a new level as it conducts more than light. The principle is to embed normal to the light exposed side of a concrete block a very high density of tiny fiber optics. Each fiber conducting not only the light it receives but also the variation in intensity which are inherent of natural light. For instances, the shading from the foliage of a tree or the color of one’s hand on the outside part of the wall are perceivable, as the color of orange sun set would be. It is fascinating to try to figure out how it is made! In fact, it appears to be as a scaled down version of the “beton verre” ou le “beton armée translucide “ BAT, where the glass fiber replaced the original glass block (which will be featured in a future post).

In this new version of the translucent concrete, there is at least as much cement if not less than glass, it is much more than its predecessor with glass block, where the cement was just used as a joint. Here the cement is as present as the glass, almost as evenly distributed on the surface. Hence, from outside the wall appears opaque like a “normal” wall when not lite or with a cloudy sky. But when the light hit the wall, from inside, one sees suddenly the wall glowing with light, even more with color or the moving shadow of a tree, or the silhouette of someone passing next to it.

This equal balancing of light and shade make it certainly more mysterious than its predecessors which were clearly a glazed wall or more interesting than a translucent glass pane. All these devices have something in common, they all enhance the light flow, the marvel of its rise and disappearance, certainly more than others devices because they are set within walls or roof which are mostly opaque. Transparency for the view is not the subject, only the transfer of the light flow counts. The deck prisms have opened the path of several lighting system, one of the most exciting one being the vault lighting and prismatic light redirection systems which are the subject of the post vault light.