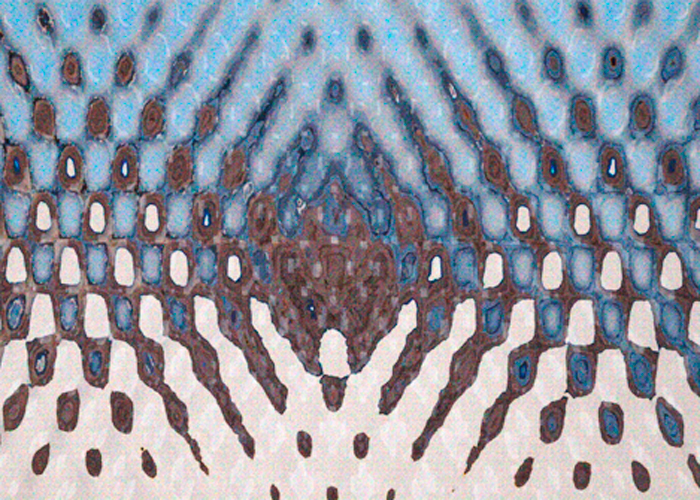 A quick survey of realized “formed glass” projects shows a wide range of scale of deformation. Depending of the amplitude, the perception of and through the glass varies quite of lot; not only the appearance but also what I call the side effects such as caustics or distortion.

FIG : a range of deformation of glass for some architectural projects built recently

Surprisingly, there are fewer projects with a glass texture in the range of 5 to 30 cm amplitude. It is unexpected since the glass can be done by thermoforming, which is a quite well known technology not so pricy if the mold is not too expansive.

When working on the Timescape and Light explosion experiment (see related post) I found out that this range of amplitude (5/30 cm) had the most potential for reflective or refractive light projection at an architectural scale. The first aim of this little research was to fill the gaps in the range of scale, 5 to 30 cm range.

This work has started in 2008 and is still on going. I have called this first part “capiton” which was more a code name than a final formal concept. The “capitonage” done on mattress or armchair are convenient to replicate by a grid of high and low point, which are easy to parameter in x, y, z and therefore a good starting point to script but also to fabricate.

Mostly, the idea takes its origin in the picture below, which shows a result of an early stage prototype of a project I was involved with. It shows a failed attempt of concrete cast supposed to reach a smooth free form surface .It is a example of uncontrolled sagging which at the end turn to be quite beautiful .

To produce the first test and sample, I worked with a substitute for glass, Pmma sheet or polystyrene or PC. The pieces were about A4 format and 1 mm thickness. This is obviously cheaper than glass and easier to do with no equipment. Melting Pmma sheet into a regular oven onto many supports was a good exercise, the output were not that great and it would have been much more efficient to do a vacuum forming but I wanted to use only gravity and get familiarized with the thermoforming principles. It reminded me how difficult it is to control and anticipate the results.

As anyone who has played with melting plastic knows, it is certainly easier than glass but still an art depending on a lot factors. For instance, the mold: what is it made of? does is gather heat or is it porous to heat? The question of heat itself is essential: how does it flow around the sheet to form ? What is the curb of heat rise and decrease … ? Then, there is the glass support, What are the supports of the sheet above the mold when it is still flat ? How to remove them during slumping as the door of the oven is closed, (and should not be open to let cold air in) ? …In short, I got what I got with not much control on it, but it gave me some basic feedbacks and help to understand the difficulty of baking glass.

As for the production of the “Light explosion” caustics reflectors, there is no limit to the type of texture that can be done as long as they are producing interesting caustics in reflection or refraction. Here also I use all sort of supports to slump the acrylic such as chain link, embossed plate, expanded metal, random arrangement of balls or tubes on the bottom of the oven. Then the results were tested with sunlight and in transparency …ect It made me wonder about, the texture itself. What is an interesting texture?

The most interesting textures were surprisingly the most structured one, meaning texture with a somewhat rational composition as opposed to totally free from or random. On one hand they had a strong graphic presence and at the same time, this watery reference, I was looking for in part due to the material and the forming process which tend to do soft and smooth surfaces.

After a preliminary phase of discovery with model and some first simulation, I teamed up with Minh Man Nguyen, with whom I worked at RFR. He helped to parameterize and generate the surfaces, which we decided to simplify into a field of bump, very close to a “capiton”. The repartition of high and low point could be repetitive or random with heights that can vary.

After modeling some quite crude embossed surface, we had the idea to use pattern interference of wave. Wave, undulation, interferences, light waves, sound waves, magnetic fields compose our daily environment and come quite naturally with glass surface. Several surface variations were tested, starting with bump patterns and interference wave patterns. They were providing the structure to the pattern that we were looking for without being too literal and too rigid either.

This serie of digital model were done considering the glass envelope as a double skin with water inside or just a really thick glass for the sake of the simulation. Each caustic pattern it generates scrutinized as well as the influence of the pattern on the transparency of the wall / level of distortions. This set up has clearly an influence on the result, but the physical model quite impressive and the water wall idea is still in the air.

The “capiton” pattern is a very structured pattern, and even if the first digital model were much less elaborated than the physical test, both were giving similar direction. With a very structured pattern and a strategy of superposition of identical, symmetrical, totally or partially different, quite naturally some Moiré effects appeared, due to the distance between the sheets. It was quite subtle, since the texture/pattern is made of transparent material. Of course, this moiré effect could be enhanced with rotation of one texture in front of the other, or a translation or even a scaling , bigger, smaller of one of the sheet.

But when the cavity is field with water and the sun goes through it, the presence and the materiality of the glass are quite amazing, moreover if a Moiré occurred.

With sunlight, the combination of moiré and some local pools of brightness make the model almost not bearable and totally hypnotizing at the same time. Even with a tiny model, one can see that if you move slightly around, the moiré effect reveals itself more, to a point of feeling dizzy… but again dazzling and still beautiful.

This presence of glass is much more rich than a transparent flat glass which only gives you the impression to be outside. Why not going outside? where does this need of seeing inside exactly what you will see outside comes from ?

With these transparent moiré, one doesn’t “see” outside, meaning that it isn’t fully recognizable , but ones perceive outside, the glass is still transparent. The outside is demultiplicated by some small odd lenses , it is distorted , not only present, letting in light and the hue of the sky but as these od lens concentrate the light , it is also very intense.

I have the feeling to read a JG Ballard novel or some poem from Henry Michaux, describing something mundane slowly getting totally off road.