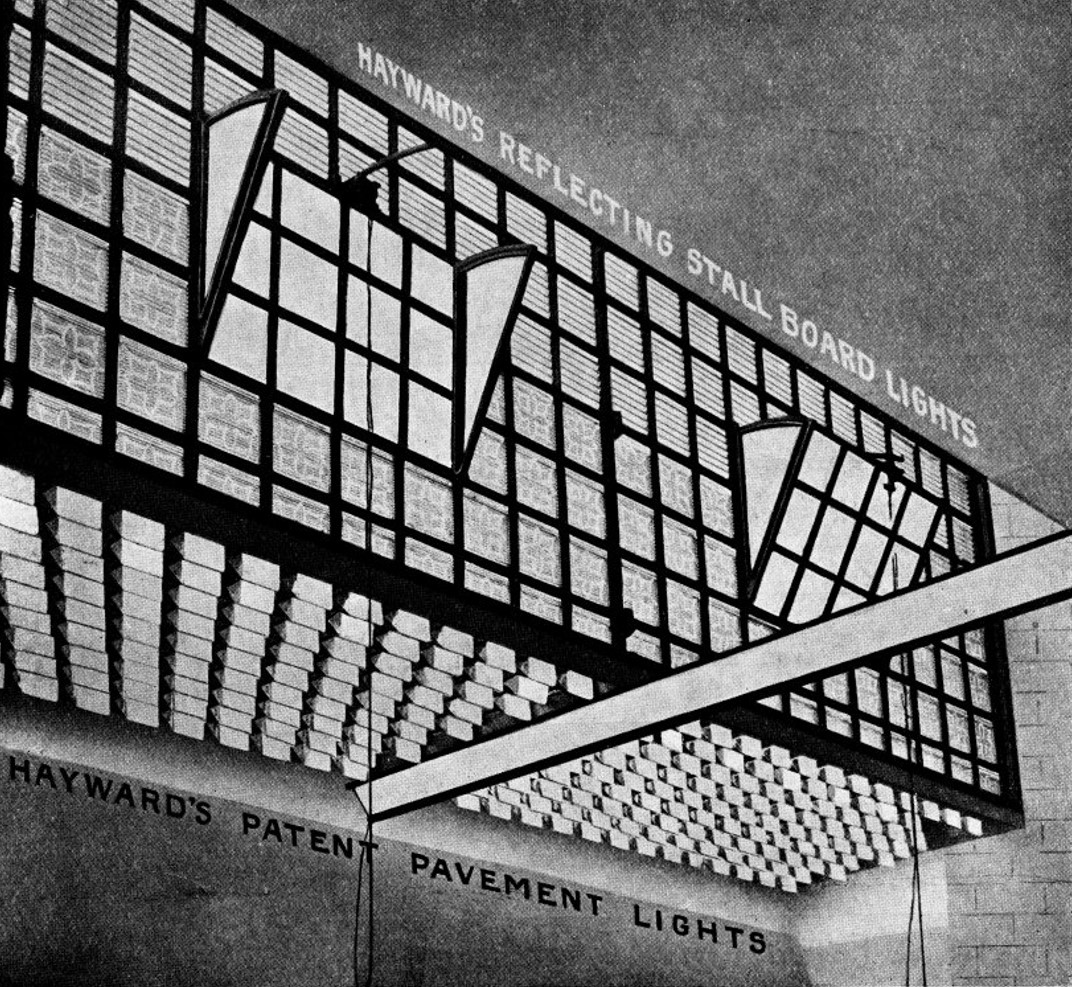 In the post “Deck + Prism”, we scratched the surface of a subject also referred to as “Vault light”that requires more attention. Not only it is important to discover the key people who have contributed to the development of these technologies, but also to grasp the inventiveness behind each new ideas, the extraordinary vitality and desire to improve and find new ways for better lighting. 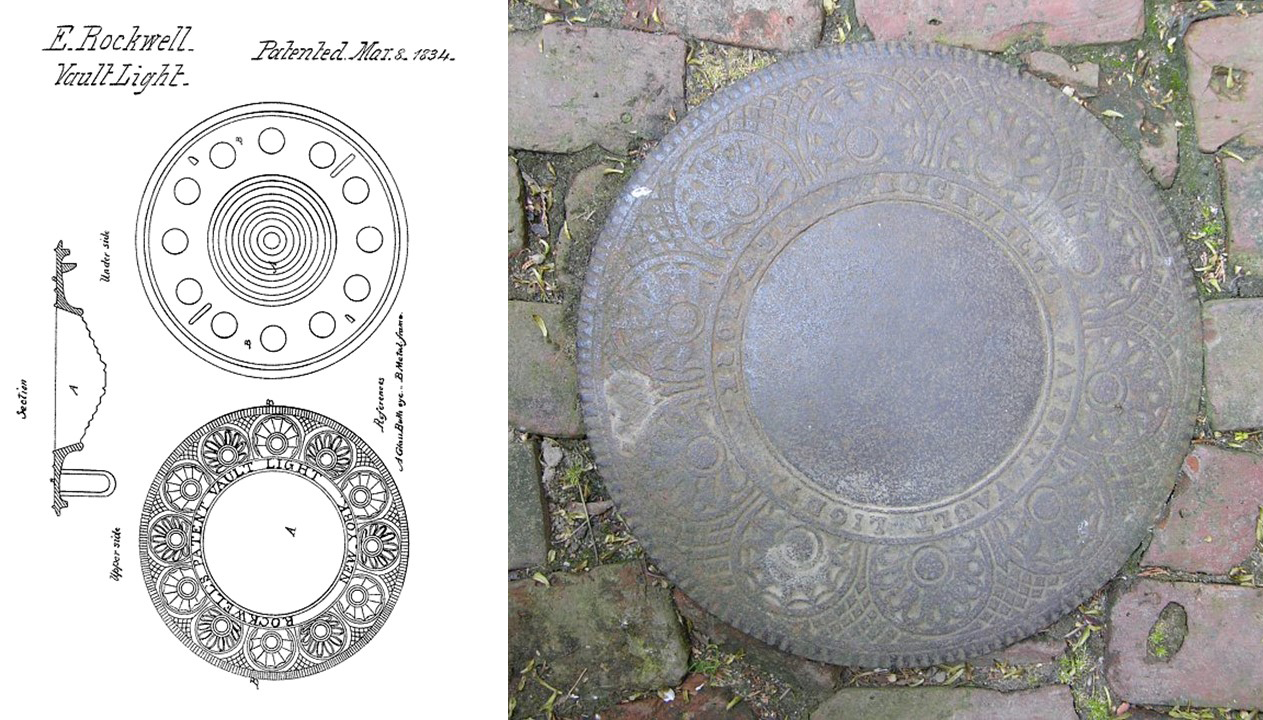 Even more, one can wonder what potentials were left untapped? How can one revisit this body of work and reinvent some new apparatus with some contemporary concerns? This post would have been possible without the existence of Glassian.org which I recommend to visit if you want to pursue in detail the subject.

E. Rockwell – T. Hyatt In the early XIX century in UK, the principle of deck prism, was adapted to light basements by E Rockwell who has files a first patent in 1834. By creating a large bull eye glass element held by a ironcast frame, Rockwell replaces the open grating that were commonly used on sidewalks to let some light enter the space below. The new device had two main advantages. First of all, it brought a relative impermeability to air and water (at least much more than the holes of the grating), and then a better surface to walk on. Very soon after, another inventor Thaddeus Hyatt “complained in his own patent application, “These glasses are extremely liable to fracture, and when broken leave large and dangerous openings within their rims…”(source : Glassian.org) Hyatt went on to design an array of smaller circular lens which were much easier to produce and to replace when broken.

In his trail, several others inventors, such as Ingalls, refined the principle, introducing the important notion of light redirection through the glass elements by the use of the geometry and the law of refraction from Descartes/ Snell.

In the 1870 ies, the Haywards brother push the idea of redirection further, as Glassian, describes, the lenses acquired a more explicit prismatic shape which had a dominant side which was redirecting the light in a secondary reflection within the material.

“The next big advance was Hayward Brothers’ 1871 Improvements in Pavement Lights. Pendant prisms had been tried before but did not work well. Edward Hayward’s idea was to use a semi-prism shape instead: “…the object of my Invention is so to construct them [prisms] that they may not simply allow the light to pass through, but that they may also direct the light in an inclined direction into the rooms it is desired to light.” Using a combination of internal reflection and refraction, the prisms could re-direct and disperse light from the vertical to the horizontal, throwing light from the one bright area deep into the backs of otherwise useless spaces.” Glassian.org

All this works with prism reminds us of the works of Fresnel (see post Fresnelia) . Fresnel published his first report in 1819, on July 20, in 1823, the first dioptric device was installed on the tower of Cordouan, during the next 10 years, about 15 lighthouses where equipped with Fresnel lens in France, … ect In the 1870 ies, many large scale Fresnel lenses were already in use on both side of the Atlantic and in UK. In fact a fierce competition was going on between to well established company specialiazed in the production of these extraordinary apparatus : the Chance Brothers and Barbier, Benard § Turenne (more info : http://uslhs.org/fresnel-lens-makers ). 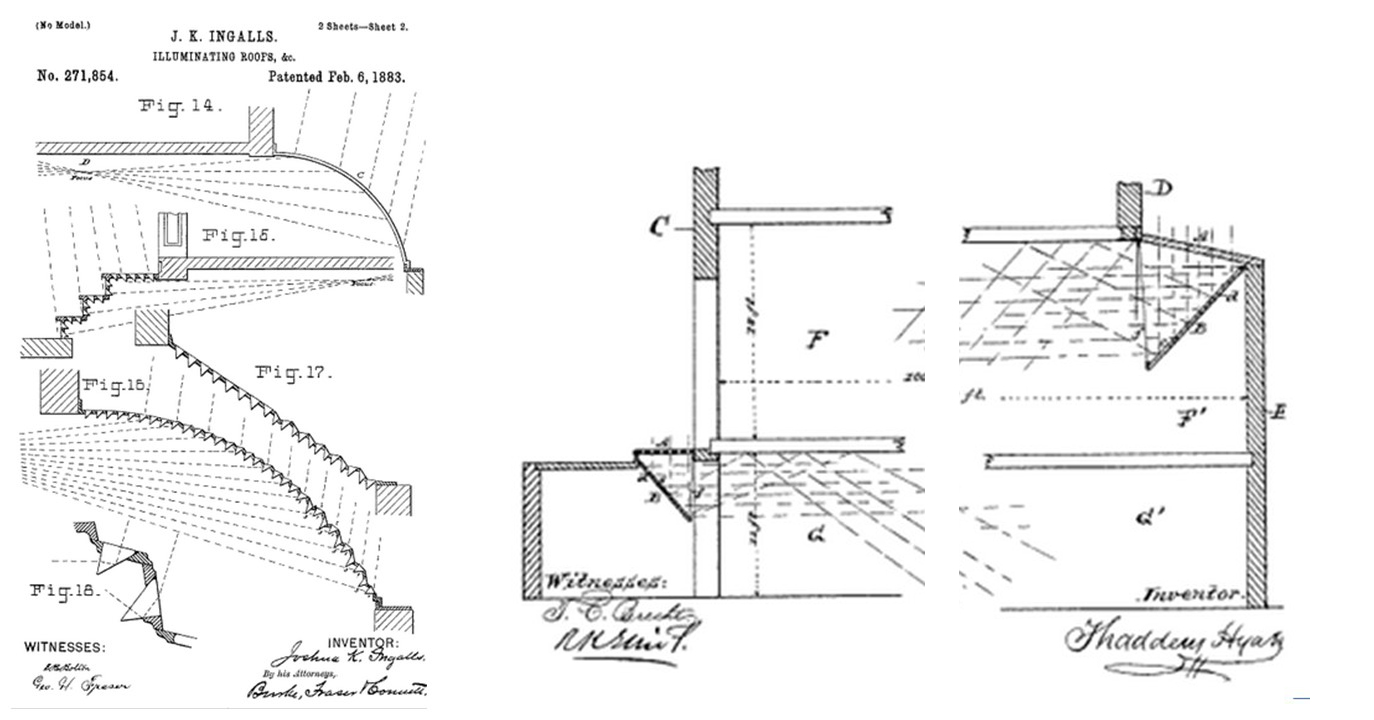 It is difficult not to establish a link between the light house lenses and the vault light development First of all, the principle, even very crude for the vault light, is quite similar. It takes advantage of the refraction in a glass piece. Second, it requires a similar level of the glass making expertise, in particular in casting thick pieces of glass as clear as possible and polishing them. As presented in the article from Thomas Tag (1), the glass industry is already a small world, where people travelled from one country or continent to the other to work for one company or its competitors, one could easily imagine some technological transfer between these close industries. This raise a question though, when one considers the level of development that implies the construction of a Hyper radian Fresnel lens for instance and the apparatus devised by the Hayward brother and consort, it is difficult to reconcile how could there be such a technological gap? The level of technicity, physics, geometry brought not only by the inventors of the light house lenses but also by their makers seems so much greater than the one of the vault light industry. May be this gap is similar when you compare the window of the Columbia space shuttle or of the Cupola of the space station and the window of the individual house on earth, there are clearly not part of the same game.

But let’s get back to vault light systems, another puzzling thing comes from some of the patents themselves. If one considers the principle section which describe the object or the shape of the refraction device, it is difficult not to wonder about its actual efficiency or to understand how the glass piece actually redirect the light. In fact It seems that many of these companies were more on a run to files as many patents as possible to beat or impress the competition than to solve at its best some lighting challenges.

As for the large scale Fresnel lens, the market of vault lighting is booming. It turns out that the competition is fierce at a time when the electricity is far from being everywhere even in cities. Getting some natural light a bit longer is worth the investment, but the quality of this light is also important and it is not so surprising that the device acquire almost right at the start, a decorative dimension. It is not only a tool as the Light house are, it is also a potential for design, for creation with light in an architectural setting.

In the post “Luxfer and co”, we will see that this was just an appetizer compare to the works developed by this company and its competitors to push light even further into buildings