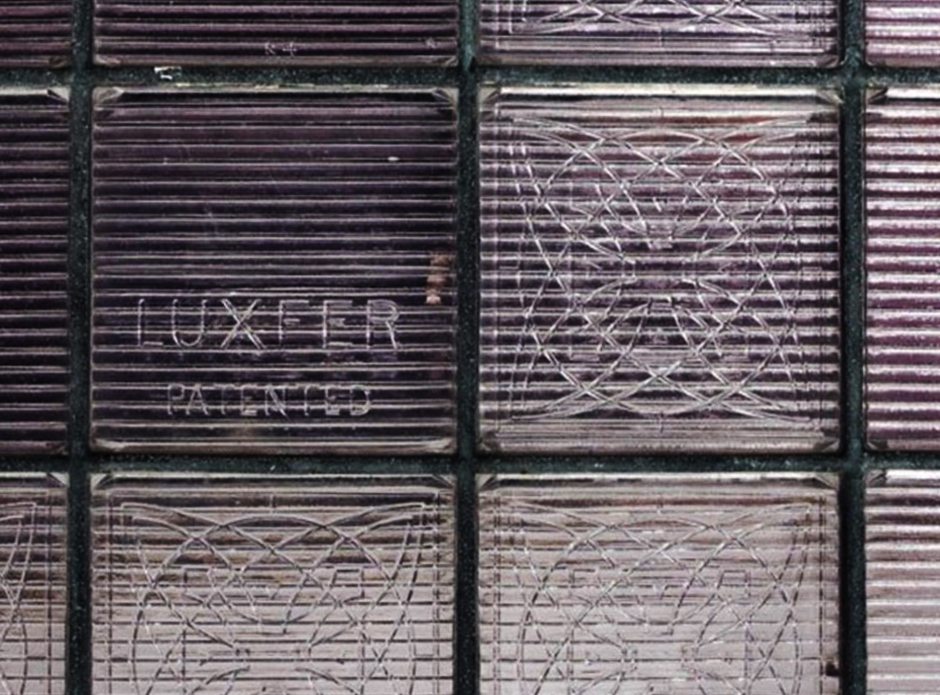 As we saw in a previous post, the introduction of prism to redirect explicitly the sunlight into a basement was the big move for the vault lighting. One invertor had a particularly big influence on this development. It is James Grey Pennycuick . It would be useless to summarize his biography which can be founded here, https://www.luxfercylinders.com/about/company-history

The important point to remember is that James Grey Pennycuick lead the way: filling patents, creating partnerships, several companies, among which the famous Luxfer company in 1897 in Chicago.

Glassian:” the most familiar type of prism glass are prism tiles, which take the reflection/refraction idea of semi-prism vault lights and applies it to vertical windows. “ “They were based on Pennycuick’s 1885 patent for window glass with horizontal prisms on the inner surface, and introduced commercially in 1897 by the Luxfer Prism Company. They were an instant success and the tiles were very widely used. Prism tile installations can still be seen in many small towns where they were especially popular as transom lights above storefront windows. they were also made by the American 3-Way Prism Company (with whom they later merged), Solar Prism Company, Condie-Neale, Jupiter Prism Company and others.”

Pennycuick, original patent shows a rather small tile with casted linear prism on the exterior face. The size varies but it is approximately 10 x 10 cm. When looking at the commercial presentation, it is delightful to read the text, as if the devices were magic …. it is also interesting to see the numerous options of tiles. In fact, they were engineered to work specifically according to the orientation and location of the building.

When one looks closely to the little tile, the quality of the product and therefore of the cast is stricking, no bubbles or very few, the surface aspect is very smooth, with very few marks left from the mold or the process unless the unavoidable very small “ripples” of the initial glass drop before pressing.

During the development of the products, Luxfer collaborated with some of the lead architects of the time such as, Louis Sullivan, Frank Llyod Wright, Bruno Taut or even Adolf Loos … As if Luxfer had understood that these collaborations were not only useful for sales but necessary for the product development. As we saw previously, even if the main sailing point is bringing more light, it is a lighting device and therefore has a great design potential that the creators of the time were quick at understanding the potential.

There is certainly another reason to forget partially the efficiency to make the tiles visually attractive. One of the main client were storefront owners. They placed the tiles above the display window, to push the redirected light toward the ceiling far into the store. This position is also a premium position to signal the store in the street.

Therefore the prismatic surface, soon became a mosaic, that would also glim into the sun light, with many tiles that were more made to be seen than to be efficient. It is quite interesting to compare some of this store front composition, literally mosaic made of glass tiles with some contemporary store front where the use of glass is clearly used for its glamour. (Vuitton Store in Roppongi Tokyo, Chanel Store in Amsterdam, for example.)

It is a good learning, that the heirs of Luxfer today which still develop light redirection systems, should remember. Doing an efficient tools is great, but if comes into homes or even offices, it needs also to be integrated as an architectural feature.

In fact, it is surprising to see that the current light redirection systems, light shelves, …ect are disregarded by most architect, despite the fact that they appeared in numerous publication such as “intelligent glass facades “ by Compagno Birkenhauser 1999 or “Sol Power” by Sophia and Stephan Behling Prestel 1996; may be it is due to their prices or needs for maintenance ( as the original ones) but also certainly due to their lacks of architectural contents.

In fact the architects relinquish to prescribe these products certainly because they don’t want “a” product but “there” product, the one and only. If this demand is often just another egotrip, each architect and project is so uniquely unique that it cannot suffer to use “a” product already used by someone else… it is also understandable that everything should not be designed only by the industrials, who are usually pour designer, too concerned by the middle taste market tendencies, because it is a necessity … Not much new under the sun , but this is why Luxfer collaborative approach is quite remarquable.

When one looks at the tiles of Frank Lloyd Wright, his input doesn’t bring much to the technology! it is purely decorative, but like it or not, it makes a difference, 90% of tiles keeps its efficiency. It is a balance between engineering and architecture which is more or less in favor of efficiency, the important things is that it brings some contents for all parties. Too many of this smart product lake off this balance. This is also the case for many “Environmentaly Conscient product”, who, with a minimum of taste wants a roof covered with photovoltaics?

Even adolf Loos, known to be against “decoration”, used the Luxfer tiles ,  it is interesting to notice that it was to enhance the appearance of the translucent marble by naturally lighting it with sunlight. What an idea!

All things considered, these systems have a limited functional interest. The light redirection is only really effective during sunny days, more precisely during a quite limited period of the day, even if you are south facing…. Even though an extensive choice of prisms defined to accommodate others orientations, the final efficiency must have been quite low. And when it works, many people complained of the glare it generated, particularly where the tiles were the most in use in commercial clearstories.

Despite all this, light must have been quite an asset to invest so much intelligence in creating these elaborate devices and using them still made sens even with these limitations. In fact, as soon as the use of electricity became more common, artificial lighting easy and cheap, the use of these tiles dropped drastically, moreover that there position above the display window, had become also a premium area for electrical signage at night…

In approximately 30 years, the product that was used by Bruno Taut for the werkbund pavilion as an odd to Scheerbart’s glass architecture, as the material of the future, had been overused, victim of its success and considered just “outdate”, out of fashion … what a pity ?

I can’t help to try to figure out what it was to be a space lite by such devices, with or without glare actually better with. Some of the black and white images gives us some hints of what it could be. I can’t help to be amazed by the refined constructive systems developed by Luxfer and its competition I can’t help to be attracted by all these decorative tiles that redirected nothing, but were just gorgeous, capturing light and using glass as the vibrant material that it should be . It is quite funny to see that there is a renewed interest in textured glass this days, and that some contemporary designers or architects redesigned the same pattern completely unaware of this glorious past. For the ones who have an inclination for façade design and natural lighting, bored by the big flat transparent and pure glass store front, it isn’t difficult to imagine the potential of a re-appropriation of these works today. At a time where the concern about energy is so great, isn’t it interesting to look again at a technology that was mostly replaced by electricity being cheaply produced with fossil fuel? – Links: https://www.luxfercylinders.com/about/company-history http://glassian.org https://luxferprismglasstilecollector.weebly.com/ http://www.waltergrutchfield.net/vaultlights.html https://luxferprismglasstilecollector.weebly.com http://www.steinerag.com/flw/Artifact%20Pages/Luxfer.htm Neumann_Luxfer_Prism_Tiles_JSAH_1995_RS9meci https://repository.library.brown.edu/storage/bdr:583423/PDF Neumann prismatic glass luxfer http://files.umwblogs.org/blogs.dir/7608/files/glass/prismatic.pdf Neal_Nielsen_BTaut_Luxfer https://eprints.qut.edu.au/82148/1/Neal_Nielsen_Thesis.pdf FaganElizabeth_GSAPPHP_2015_Thesis https://academiccommons.columbia.edu/catalog/ac:187352 https://tel.archives-ouvertes.fr/tel-01124292/file/These_LOZANO_-_CAJAMARCA_vol1.pdf