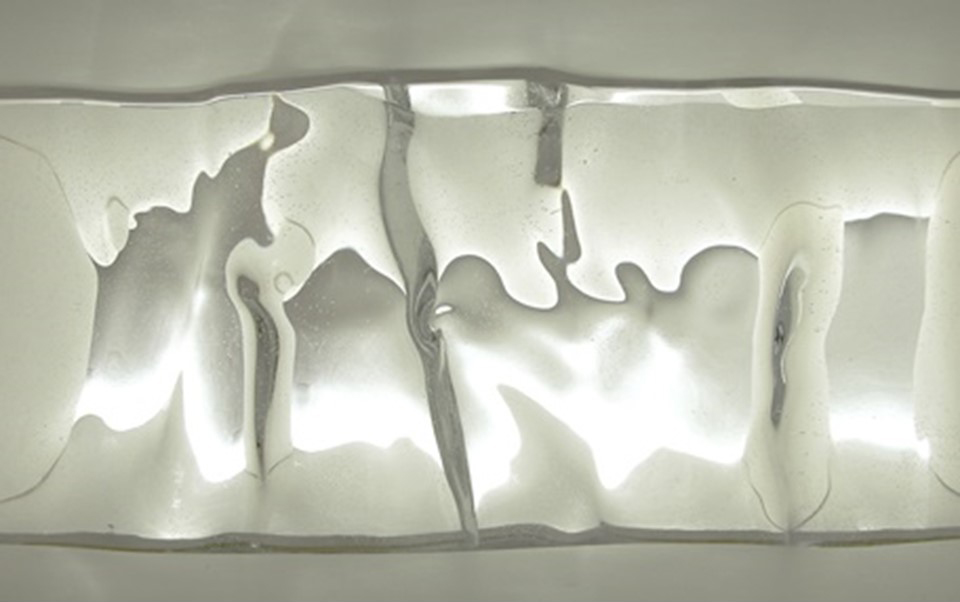 If glass remains a major component of contemporary architecture, the work with the material itself has lost ground … overall, most projects just use clear glass with some functional coatings to obtain the requested performances for thermal loss and solar gain. Most of them aim for a plain and simple transparency, as if seeing through the window was an end in itself.

In a previous post, we quoted Richard Sennett, who has noticed that transparency through a glass envelope tends to undermine others senses, privileging the view.

Olafur Eliasson mentioned him also in an interview by Hans Ulrich Obrist “Sennett suggest that by putting up the glass and isolating the tactile relations to the outside, our relations to the outside change and the sensation gets more representational. The modernist, I guess, believed that the glass sort of opened up the border between inside and outside, but the border, I believe, on the contrary got even more exposed not to mention the social differences of who was inside and who was outside. But by isolating only some of our senses, such as a sound and smell, from the “other side”, the glass creates an image or picture not unlike a realistic movie. We know the outside is there, but our engagement with it is slightly more representational”   Hans Ulrich obrist Interviews vol 1, charta, p200 ISBN 88 8158 431 x

I have been pondering this quote for some time “a glass wall is an interface which puts the world at a distance making of it into some kind of realistic movie”, It gets clearer when you are in front of an aquarium with a transparent wall. Let’s consider a big window, such as the Okinawa Churaumi main window where it is possible to watch a white shark moving in that giant frame the size of a large screen in a movie theater. https://churaumi.okinawa/en/, https://www.youtube.com/watch?v=aU73fI2Xn_E

Glazed envelops are designed more and more to see out with a full and unchallenged view. The goal seems to make the glass itself disappears; as if it was not there, just a large bay with a concealed frame to pretend at the absence of a barrier between in and out.

Practically, the larger the window or let’s call it the “transparent wall”, the heavier the glass panel becomes.  The Apple store in Guangzhou has some 15m high panels spanning bottom to top. Each panel comprise several plies of laminated glass to achieve the structural needs; up to 10 plies for a panel thickness around 200 mm for one single panel without any additional supports such as a cable and or a stiffener.

This is an amazing piece of glass but with acrylic, it can be even bigger, as the Okinawa aquarium window mentioned above, with its 600 mm thick panes to withstand the water pressure. With the proper technology, the panes can be sealed together on site in order to achieve a seamless joint (almost perfect optically) and a completely continuous display.

If these achievements are great and impressive, in many smaller examples of these trend of glass box houses starting with the Farnsworth house of Mies Van der Rohe, we could wonder of the benefit of such plain transparency.

When you step out, onto the adjacent terrace you have the same panorama. It is a bit cold in winter but all your senses are concerned, hear, smell, feel the heat, humidity, not just the view …ect . This large window is great in the winter …but I wonder about the rest of the year, not mentioning that most of these projects are single glazed…to be the most transparent and therefore they are thermal disasters. It is great in winter when it is not field with condensation, or cold nearby or radiating heat in summer. In fact it is best in mid-season, when you could as well stay on the terrace nearby….

The large glass window has some architectural virtues but even if it might seems an obvious statemen : plain transparent glass is missing a large portion of the aesthetical and architectural potentials that this material has to offer ! Why not use the window to bring a bit more than yet again the same panorama?

Glass is the essential material of optics. Lenses from eyewear to telescopes, are made of glass but also of mirrors. The whole range of reflectivity is possible with coatings, from no reflection with Anti reflection coating, to reflection in certain wavelength such as the low E or solar coating, or reflective coating that can bump the normal reflectivity of 8% to more than 30% in keeping with some transparency, not mentioning dichroic coating. We could imagine bringing with some elaborate glass compositions a wider range of transparencies which would capture light and color variation.

A way to go beyond transparency would make the window “active”, meaning that it doesn’t try to disappear but acts as present. It tells its own story as the Gothic church glassworks were telling stories; some glass composition with a presence which participates to the architectural definition of the building instead of disappearing.

“Active” could mean, on the contrary of the current apprehension, that glass can be presented as a malleable, a tactile material, almost sensual; anything but flat. After all, by definition it is a solidified liquid, why not bringing up these liquid references? Drops, waves, interference pattern, fluidity, flow ….

“Active” could also lead to reveal the modulation of the environment, such as outer temperature, sound levels, wind gust, pressure variations. The window itself and some light artifacts, it creates inside the building could reacts to the environment…. The elements are triggering the “modulation” of the window itself, a window which becomes also a lighting device. It acts on the architectural definition of the building in more ways than just being  a seamless opening to the outside or a framed view of the landscape

If glass is not limited a “yes or no” answer, once the Pandora box of transparency is open, the palette is wide, and many projects, from architects or craftsman already shows that the shades of transparencies, of translucencies, of colors, of textures, of forms constitute the real value glass.

In conclusion, first of all, realize and assume the representational aspect of the window, but more than anything, be more playful and creative with the rich and complex materiality that glass has to offer. In the post “smart Glass” we will consider some new aspects of how to make a glass pane be active, reviewing technologies which are in the making that could transform the nature of transparency in the near future.

One Reply to “Beyond Transparency”